The reality of Virunga National Park & a safari you will never forget!

The reality of Virunga National Park & a safari you will never forget!

Virunga National Park is the most biodiverse region in Africa, a region that envelopes swathes of afro-montane forest, the home of an increasing population of over 1000 Mountain Gorillas...

The sweat had already made its way through the zipper seams bringing an undesirable amount of moisture into my camera bag which made the front element of my simple and trustworthy 50mm fog up in her tiny little compartment. My right knee felt a little wobbly and the lead Virunga guide wielding his Kalashnikov showed his own, but very minor, signs of fatigue with beads of sweat evolving on his forehead. At the last checkpoint of the now very steep gradient at about 3400m above sea level, a young porter held his hand out to assist a climber for the last few hundred meters of our summit, the turning point of the climb and the beginning of accelerated heart beats and anticipation. We all looked up above us at the array of mountain cabins resembling enlarged dog kennels, grabbed our handmade walking sticks which were now worn at the bottom from the lava screed and took a last sip of water before the last 200m scramble up towards our final destination. 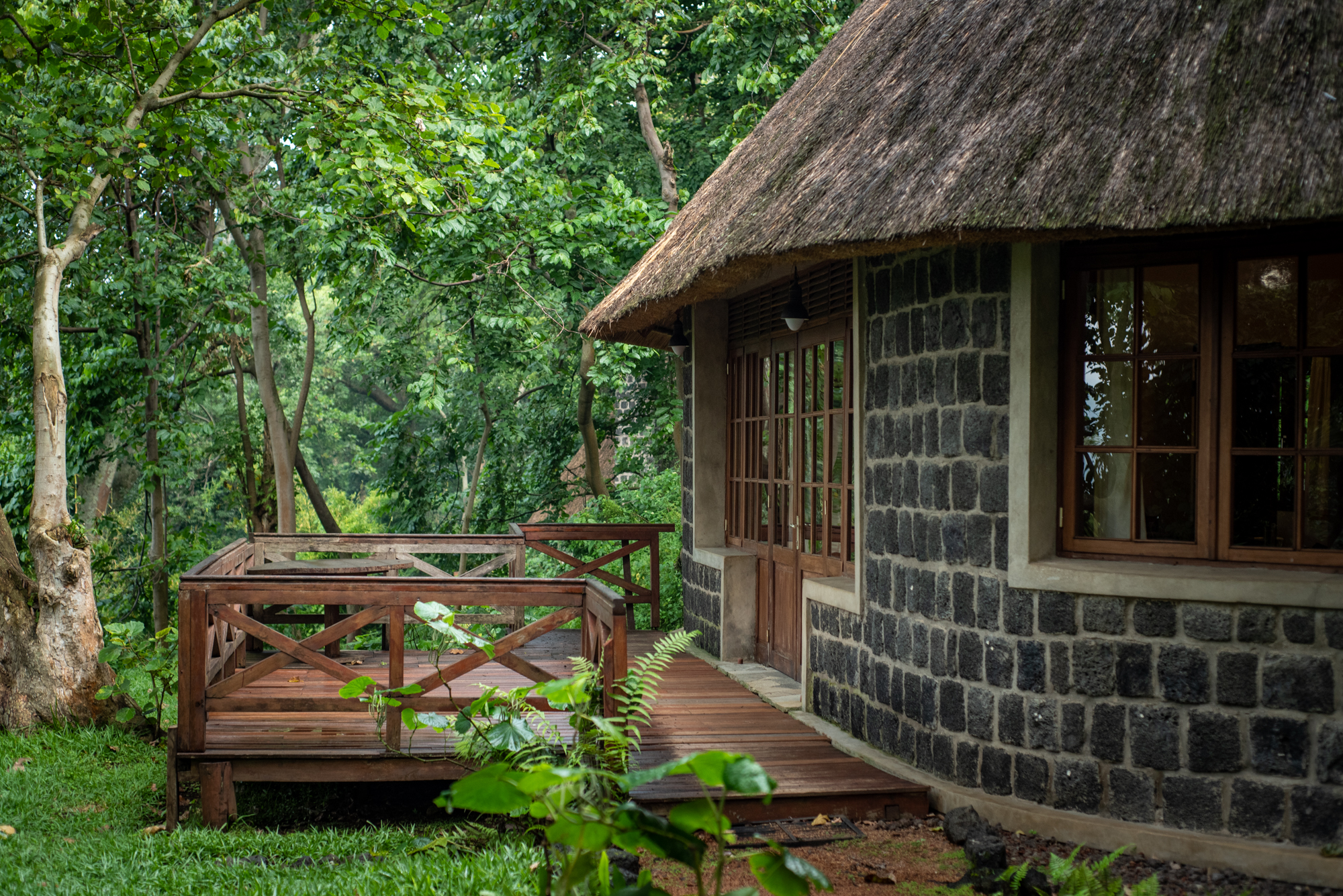 Back down at the bottom, a faded school bus-yellow sign bordered in navy blue read Albert National Park 1925, now hardly visible through the decoration of AK-47 rounds that in the past helped time pass by for a bored and young group of rebels. We had just reached the trekking point from an hour-long convoy transfer from the headquarters where the famous Gorilla Sanctuary, Congo hound Kennels and Mikeno lodge are located within the Rumangabo base. Mikeno lodge might be one of the most unsuspecting camp locations in Africa and after an unavoidable dose of having your eyes peeled wide whilst passing through the towns in and around Goma, it quickly becomes apparent that an experience to Virunga won’t be like anything else you have ever experienced in Africa before. “without Hope we have nothing, so we will keep pushing ahead and carry on doing what we do”.

Virunga National Park is the most biodiverse region in Africa, a region that envelopes swathes of afro-montane forest, the home of an increasing population of over 1000 Mountain Gorillas who themselves played the crucial role in persuading humans to protect the park in the first place. It’s a protected area that spills over into Savannah rich valleys which still resonate with the calls of Savannah Elephants while at the same time their Forest cousins navigate through thick groves of pan-African bamboo up on the higher slopes of the extinct volcanoes. The reserve lies at the middle of the beating heart of the great Albertine Rift, a mountain range so rich in biodiversity that it is home to almost half of all known African mammals. The monumental task that Virunga National Park carry out to protect such an extraordinary ecosystem forms the foundation to an experience here. The ranger force of 750 men and women who protect this park risk their lives every day in return for keeping the region free from illegal activities. The dense forests, size of the area and the armed groups that have financial interests in the park through poaching and coal extraction makes Virunga an extremely difficult place to manage and protect. The task may seem impossible but it doesn’t take long to witness the intoxicating motivation that every member of staff you will meet will have, for Virunga National Park has proven to be a beacon of hope that for the most part is almost impossible to find within the North Kivu province. Julie Williams, head of tourism for Virunga tasked with one of the most challenging tourism operations in Africa, put it perfectly “without Hope we have nothing, so we will keep pushing ahead and carry on doing what we do”.

Not only does Virunga offer a completely ‘full-circle’ experience where tourism participation goes directly towards the park and conservation, it also has some of, if not the best, Mountain Gorilla viewing in Africa. Group sizes of trekkers are the smallest, between 4-6 people depending on Gorilla family composition and the intimacy and exclusivity make an already humbling experience even more profound in Virunga. With now 10 families to choose from when trekking, Virunga protects a very fragile population of Mountain Gorillas in a region that spans over a critical part of their greater habitat. With several camps across the landscape in Virunga and set packages designed to maximise on all areas, wildlife and geography, a week in Virunga seems short but incredibly full. 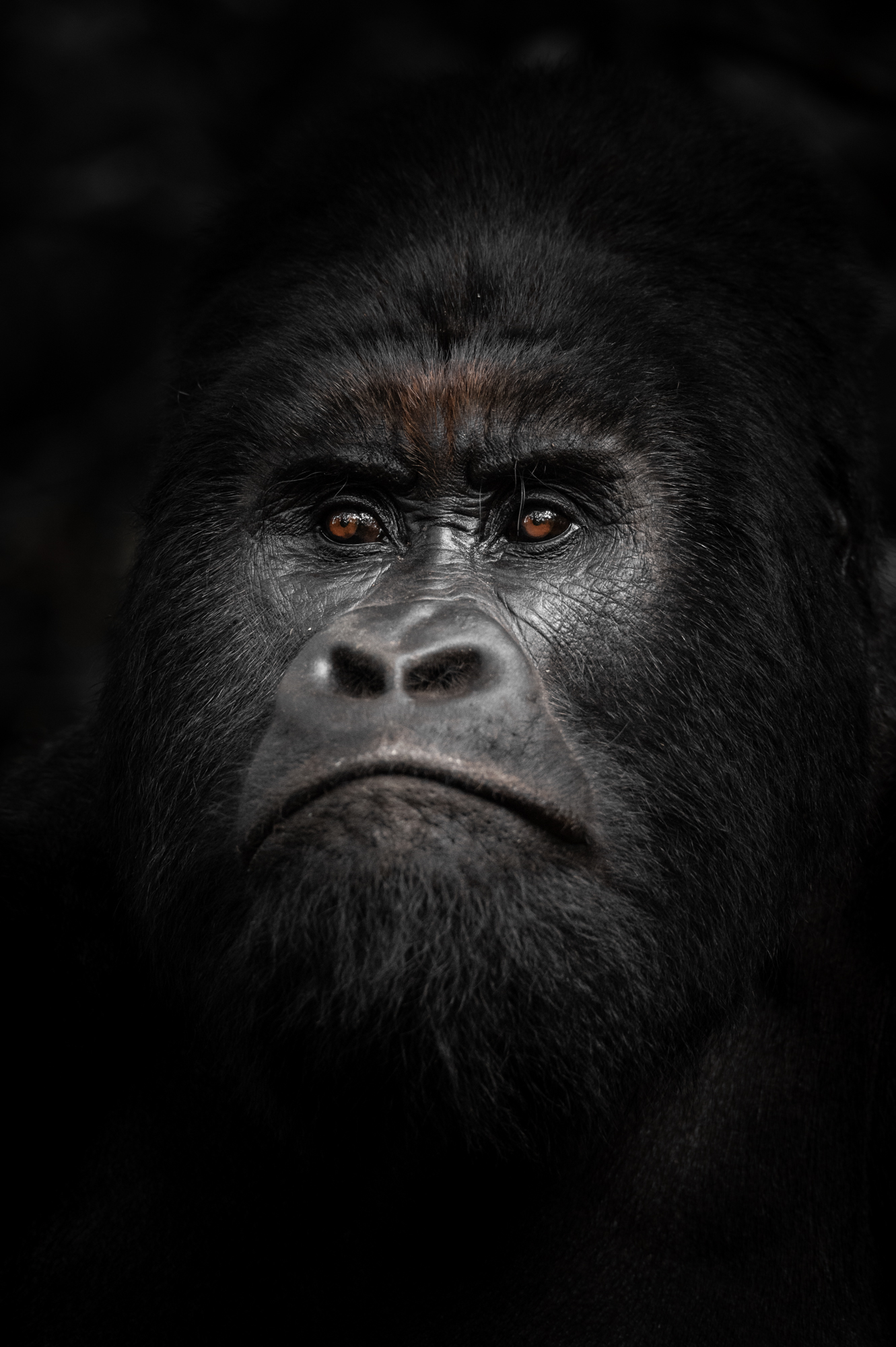 Then there is Nyiragongo…

After setting off from the trekking start point near the Albert National Park sign, a merry walk quickly ascends into beautiful low altitude forest with many bird species found here seldom found anywhere else in the park. You do however very quickly realize that the binoculars around you neck get heavier as the gradient steepens and within an hour it’s a guarantee they will be tucked away in your steaming backpack. The altitudinal stratification of habitat is extraordinary on this ancient volcano and after about 4 hours and over 3000m, you enter the mystical afro-alpine zone with giant senecio plants replacing the forests below. Nyiragongo is just too short to host the highest African vegetation zones that resemble the moorlands of Scotland but the 3500m summit is appreciated by most as the final destination. It is hard to describe what lies before you at the top of Nyiragongo, a very active volcano with the largest lava lake on Earth. Having spent time a few days before in the presence of Mountain Gorillas adds to the mystique and sensation of this place, but being on the top of a 300m vertical cliff with a bellowing lava lake below as the blue hour dances with mist over the crater rim is lik nothing else on Earth. Virunga National Park, the story of conservation and the committed people behind it make the oldest National Park in Africa and the most bio diverse an absolute marvel. The wildlife experience too is exceptional and the finale of summiting Nyiragongo rounds off an experience that is non-existent anywhere else on the planet.

By all accounts, Virunga is a place that will open your eyes and will most certainly change the way you travel in the future. It really is in every sense a sensational and powerful destination.