And there was evening and there was morning. One moment it’s light the next it’s dark. At sunset the sky is a brilliant red and orange from the dust in the air, but the light disappears in minutes. The light comes up equally quickly at sunrise. The grey colour gives way to orange and pink. Soon sun streams through the clouds, god-fingers. We are almost on the equator.

The days are a whirlwind of activity and disappear in dust storms and spirals. Mount Kilimanjaro is mostly covered in cloud and remains hidden for much of our stay, although the peak peeps out and the whole mountain is faintly and tantalisingly visible for brief periods, providing a quick backdrop for a photo.

Amboseli, known by the Maasai as Empusei means salty, dusty place. The glacier melt from Mount Kilimanjaro sinks below ground and appears through the porous soils of Amboseli creating freshwater springs in the middle of an arid wilderness. The contrast is stark. Year round fresh water creates an oasis of swamps in an arid and dusty plain, next to a flat dry ancient lake bed in a low rainfall area. A few hundred metres from the water the green turns to dust, a flat plain gradually changing into thorny scrub and acacias. The Kilimanjaro glacier is melting, year by year reducing in size. Without the waters from the melt, Amboseli will die, but for the moment water is plentiful.

Amboseli hosts a vast, impressive and astounding array of wildlife and birds. The sheer number of animals is staggering. The lakes attract flocks of water birds and flamingoes. 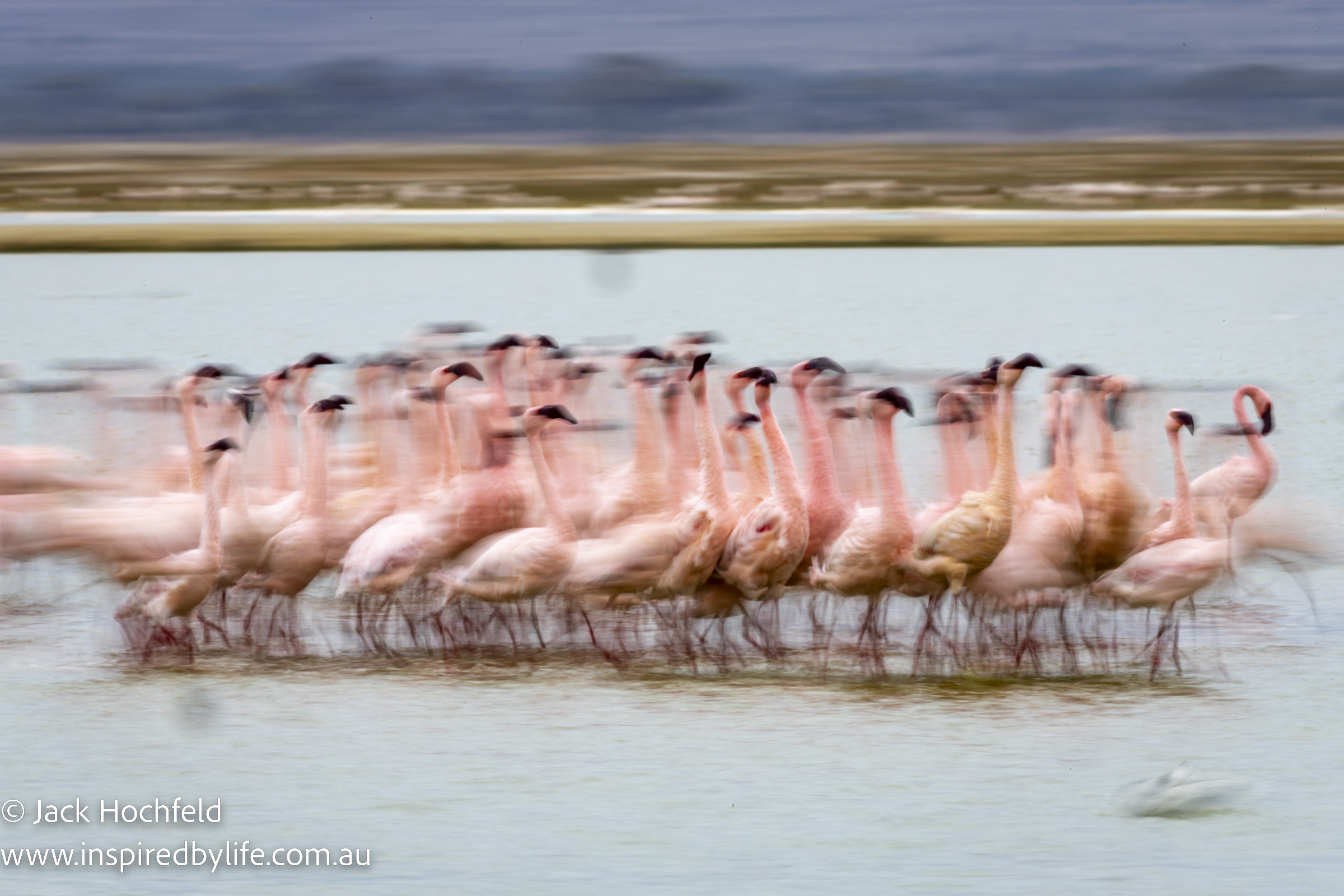 The green area surrounding the swampland is limited, so most of the mammals troop between the feeding areas and the water. Rains have been poor for several years and were particularly poor in April, not providing sufficient moisture for the grass to grow and regenerate. The grazing area is largely a dust bowl. The antelope are skinny, in a poor and desperate condition although plentiful. Carcasses litter the landscape and rot, too numerous for the hyenas and lions to consume. Vultures tear into the remains eating the soft belly and other soft body parts, but are unable to breakdown the flesh and bones. Lions are noticeable by their absence, probably sated and resting under a tree. There’s a frequent stench and whiff of putrification as one drives past another carcass. The limited grazing in Amboseli cannot sustain the population through a major drought and the animals have nowhere to migrate. It’s heartbreaking and shocking.

It’s hard to imagine the transformation during the rainy season when the lake bed is covered under two feet of water.

It’s desperate, depressing, uplifting and awesome all at the same time, magnificent in the scenery and sheer numbers of animals but not the way it should be- C’est magnifique mais ce ne pas la guerre!*

Big tusked elephants are ejected from the park by the younger males and live their life on the fringes outside the park between the villages and villagers. It’s a strange existence. There is no fence between the park and the wider world, the game and the people co-exist, sort of. Villages have formed in the midst of a wilderness area. The village wells and pumped water attract game- elephants and other wildlife drink in the villagers’ communal areas, sharing the water with cattle and people. 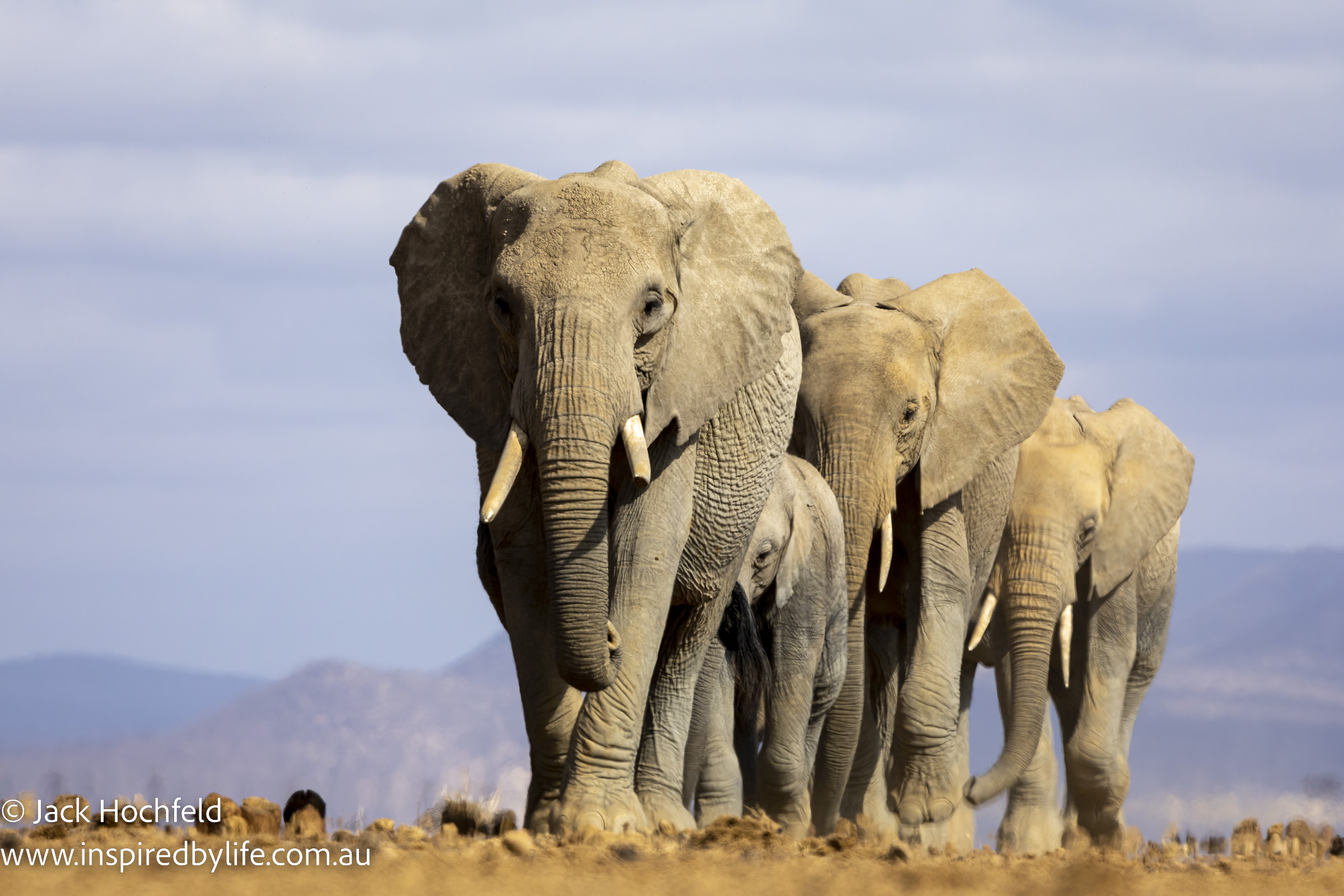 According to the Kenya Wildlife Conservancy Association, conservancies provide connected landscapes that compliment national parks and reserves and in which 65% of Kenya’s Wildlife live. Communities benefit from wildlife management and champion conservation efforts. Concession areas transition between civilisation and wilderness areas. The Maasai lease their land to the conservancy who in turn employ the Maasai  to work in the lodges, as guides and guards and to look after the elephants. Motorcycle scramblers criss-cross the veld, often three or four people to a bike, transporting bags or buckets, guards and guides. In the park scramblers frequently cross the dry lake bed, plumes of dust trailing behind them. Maasai herders and their cattle also cross the dry lake bed, sadly out of place. The cattle are competing with the wildlife for grazing.

We stay at Elephant George, part of a conservancy outside the park. Mobile phones replace radios. The guards, guides and lodges are in contact, so the elephants are easy to locate. Since we last visited a wilderness area in Africa, land rovers have gone extinct, replaced by land cruisers.

The main road from the conservancy to the park is being tarred and has been under construction for years. Traffic has taken to the veld, crisscrossing the non-road creating a rough, bumpy, powdery surface that billows dust. Some vehicles ride on the newly laid tar driving over the stones blocking the path. It takes us 45 to 60 minutes to cover 16 kms to the park, although we spend most of our time in the conservancy area.

We are the only residents in camp.

It’s extremely peaceful and quiet. Not a sound. No generator, no evening bird or animal noises. The camp runs on solar power. Lights flicker on the horizon- we are not quite on our own.

Morning cloud covers Kilimanjaro, a wide expanse of sky, a chill in the air, hot coffee delivered to our tent accompanied by an elephant or tortoise-shaped biscuit; the sound of familiar bird calls: my mother is dead my father is dead oh oh oh ohh of the emerald-spotted dove; purr purr of the mourning dove; work harder, drink lager of the ring-necked dove. The smell. A visual feast: thorn trees﻿, bush, scrub umbrella thorns. The dust. The taste of salt on my lips. Ah, Africa. 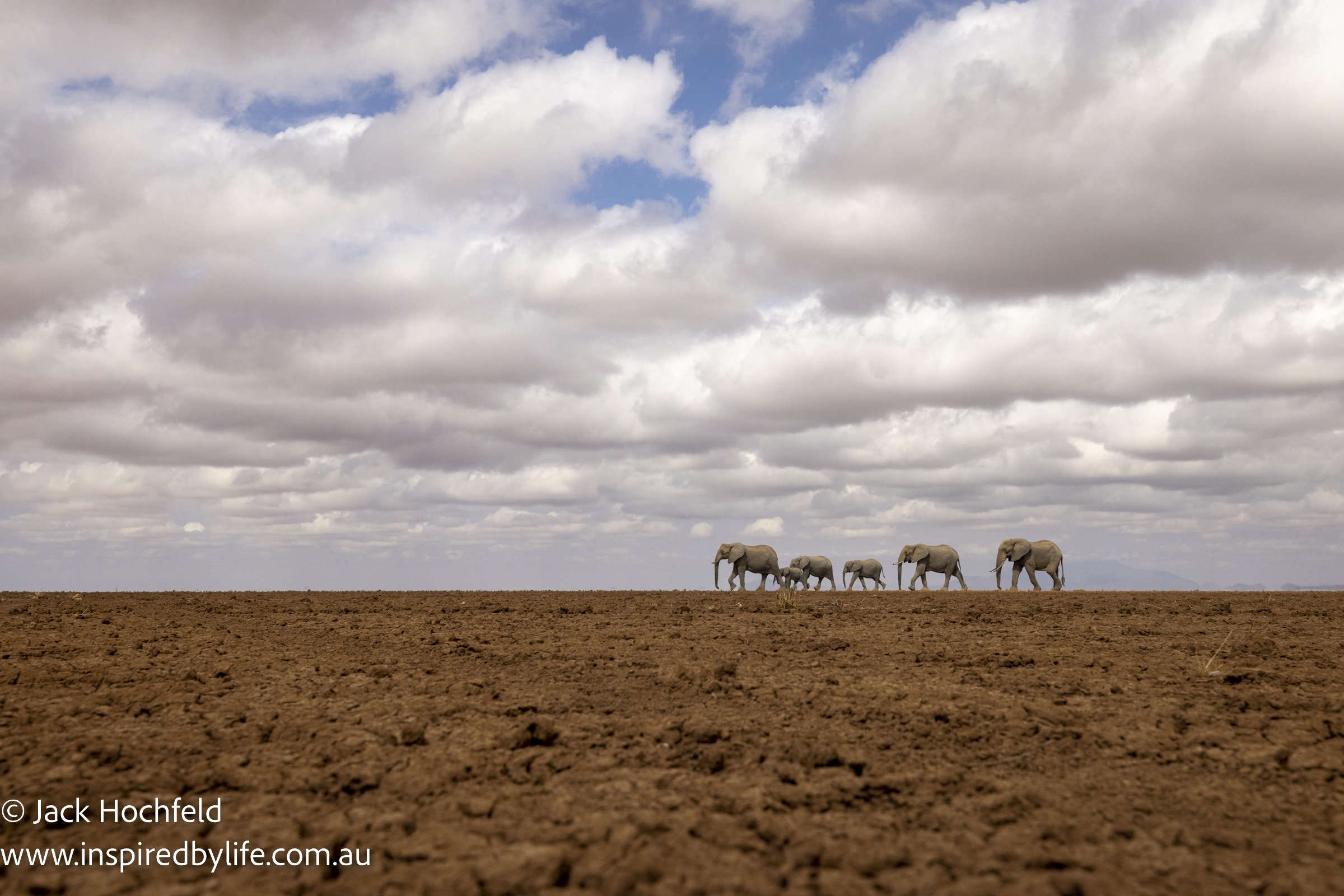 The air is still. The wind lifts in the afternoon, cloudy and overcast, but no rain. The welcome white refresher towels offered on our return to camp turn red after a wipe. The red powder dust billows and swirls around and into the car. We are permanently blanketed in dust. Dust spirals rise in the distance.

The retired male elephants have mammoth tusks. They largely ignore us as we climb out and sit next to the vehicle. They glide past in silence, metres away. Sally watches from the safety of the vehicle.

Amboseli National Park is dusty, dirty and dry, with crumbling roads, powder dust, dust spirals, a parched and cracked earth and no infrastructure. It’s tourist chaos, with a myriad number of single carriage operators and lodges adjacent to the park, who have little interest in anything but a quick and immediate cash return. Certainly very little of the income generated by the park in the form of entrance fees is reinvested- a real shame. A huge camp accomodating 200/500(?) people lies abandoned and derelict, a result of a lease dispute between the government and the operators. The matter is nowhere near resolution and is stuck in the Kenyan courts.

We move to Tortilis Lodge, a camp with more tourists but unbelievable access to the dry lakes of the park away from the chaos. The camp itself is beautiful, with wonderful trees, bird life and a swimming pool that we share with drinking baboons. It’s very different to the conservancy area.

We park in front of the elephant herds crossing the dry lake bed, lying on the floor next to the vehicle to the side of the path on which the elephants are walking. The elephants stick to the game-path walking one behind the other. They pass by within metres of us, wary, sometimes trumpeting and stomping the dust, but generally completely calm. We hear their tummies rumble.

In 1960 Kenya boasted 8 million inhabitants and in excess of 100 000 elephants. The population has increased to 70 million and elephant numbers plummeted as low as 37 000 but have since increased.

En route to the Nairobi and the Maasai Mara we fly through a dust cloud above Amboseli. The sky is brown, visibility zero. 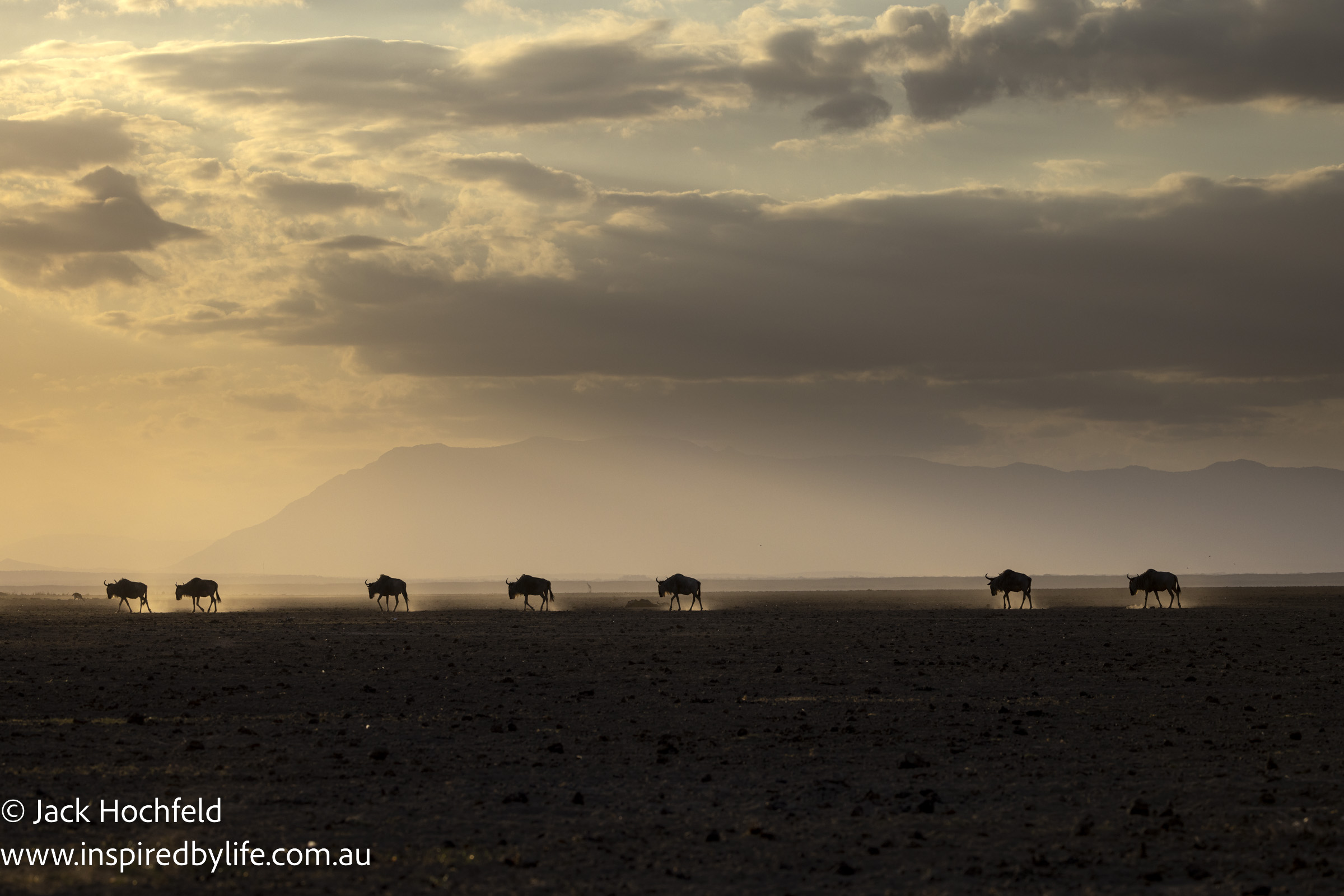 The Maasai Mara boasts wide open rolling grassland plains, green and lush, with plenty of water. The sky is immense and often filled with massive cloud formations and rain in the distance. Lone shepherd trees and umbrella thorns dot the horizon making iconic images. Game is plentiful and in great condition, huge elephant herds, wildebeest by the millions, zebras, huge prides (more like a gang) of lions, arguments of vultures. We see a kill daily, one almost taking place directly in front of us, our anticipation of the action not going according to script. We watch a lioness eyeing a topi on the far hill. She sets out. We position ourselves for a perfect view when the topi disappears over the hill. In the seconds it takes to reestablish visual contact one of the baby topi is being eaten and a lioness has its mother by the throat. 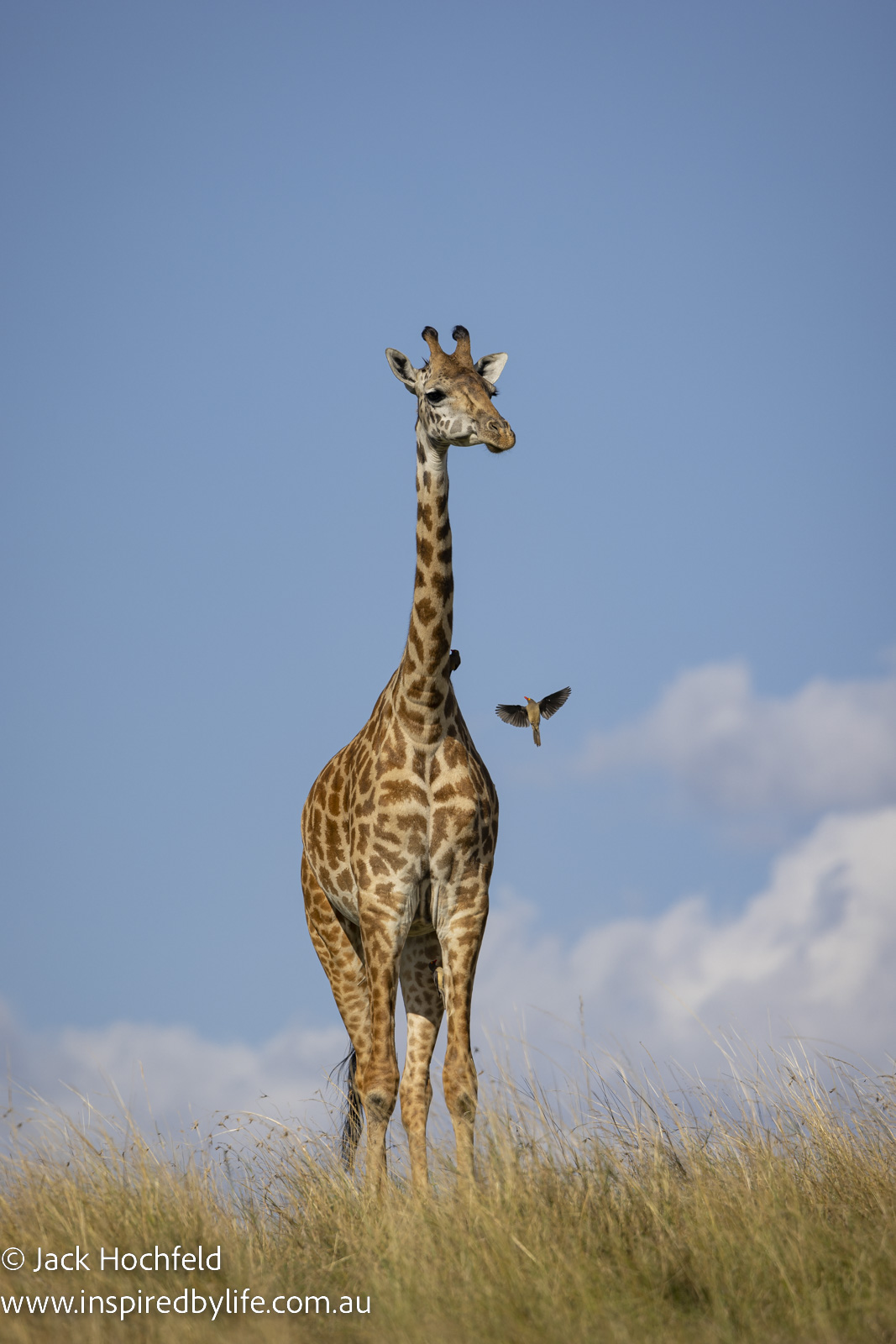 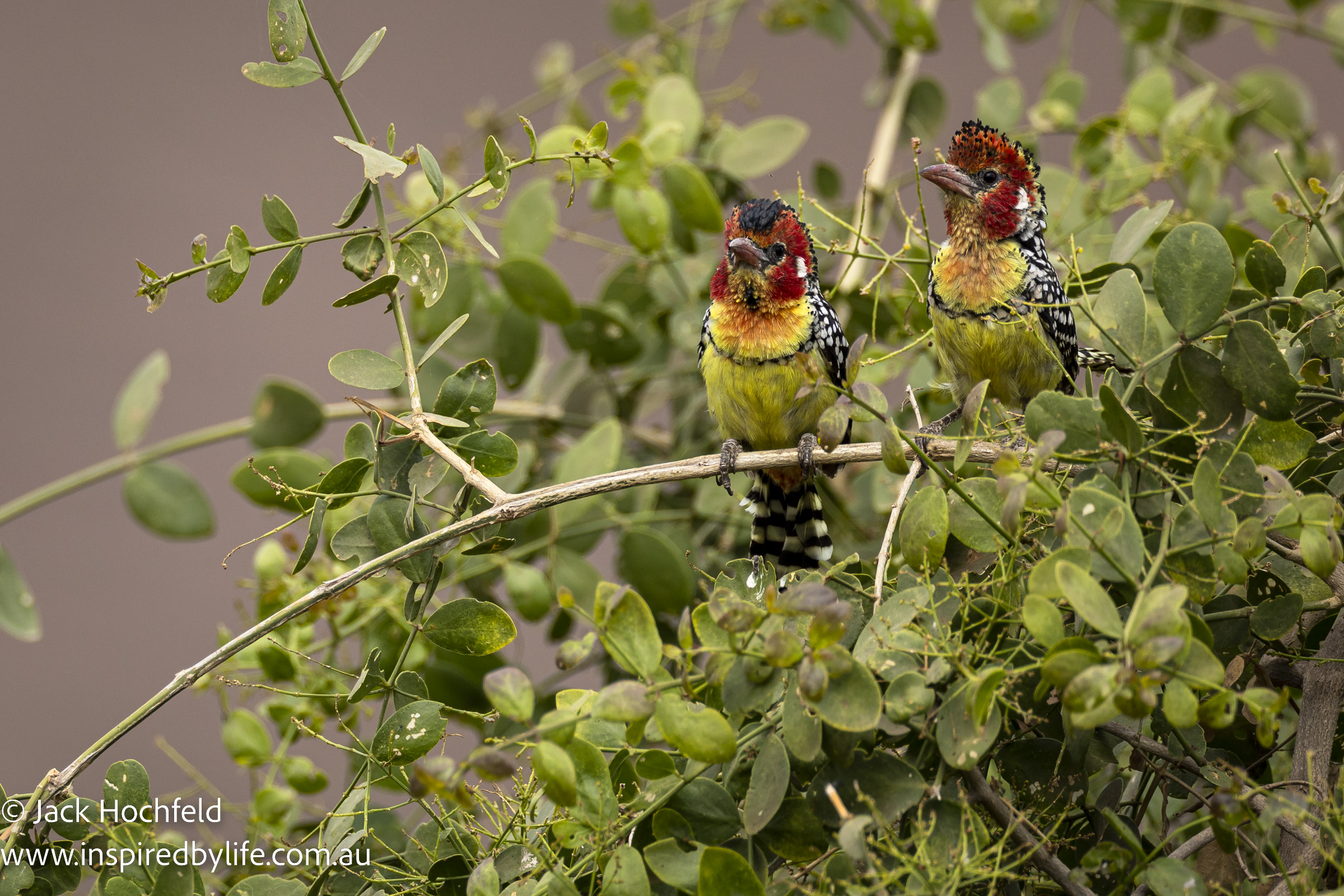 We stay at Entim Private Camp with another couple from Savannah Georgia and our photo guides, Isak Pretorius and Janet Kleyn. We have the camp to ourselves until the last night. One of the new guests is housed in a tent next to ours. I hear animal noises of a buck struggling, all the air being squeezed out of him, but eventually the sound becomes quite rhythmical- our neighbour is snoring!

On our first day we are casually watching game when Jamlick our Maasai guide and driver gets the call. The wildebeest are about to cross the Mara river, the spectacle we have come to see. Jamlick tears off, a cross-country Stirling Moss. We arrive at the point of the crossing, find a good viewing spot and as if on cue the wildebeest come streaming down, leaping into the water. Only in retrospect do we realise how lucky we are to witness the event. 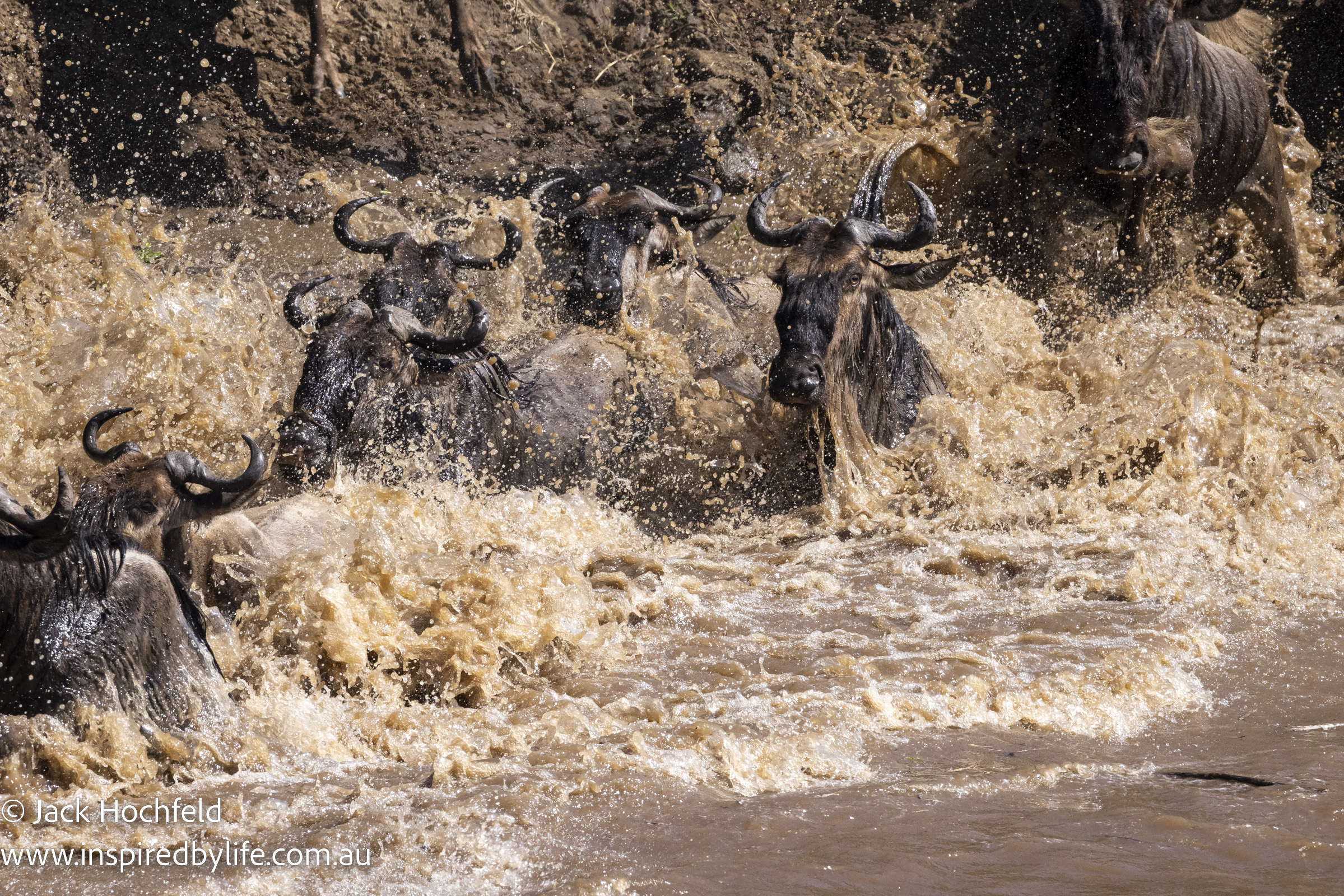 Jamlick’s driving skills, timing and anticipation of the predators’ habits are simply amazing. He gets it right each time and we avoid the hours of waiting. At each sighting he manages to get us there, in the right position, as the action is about to start. 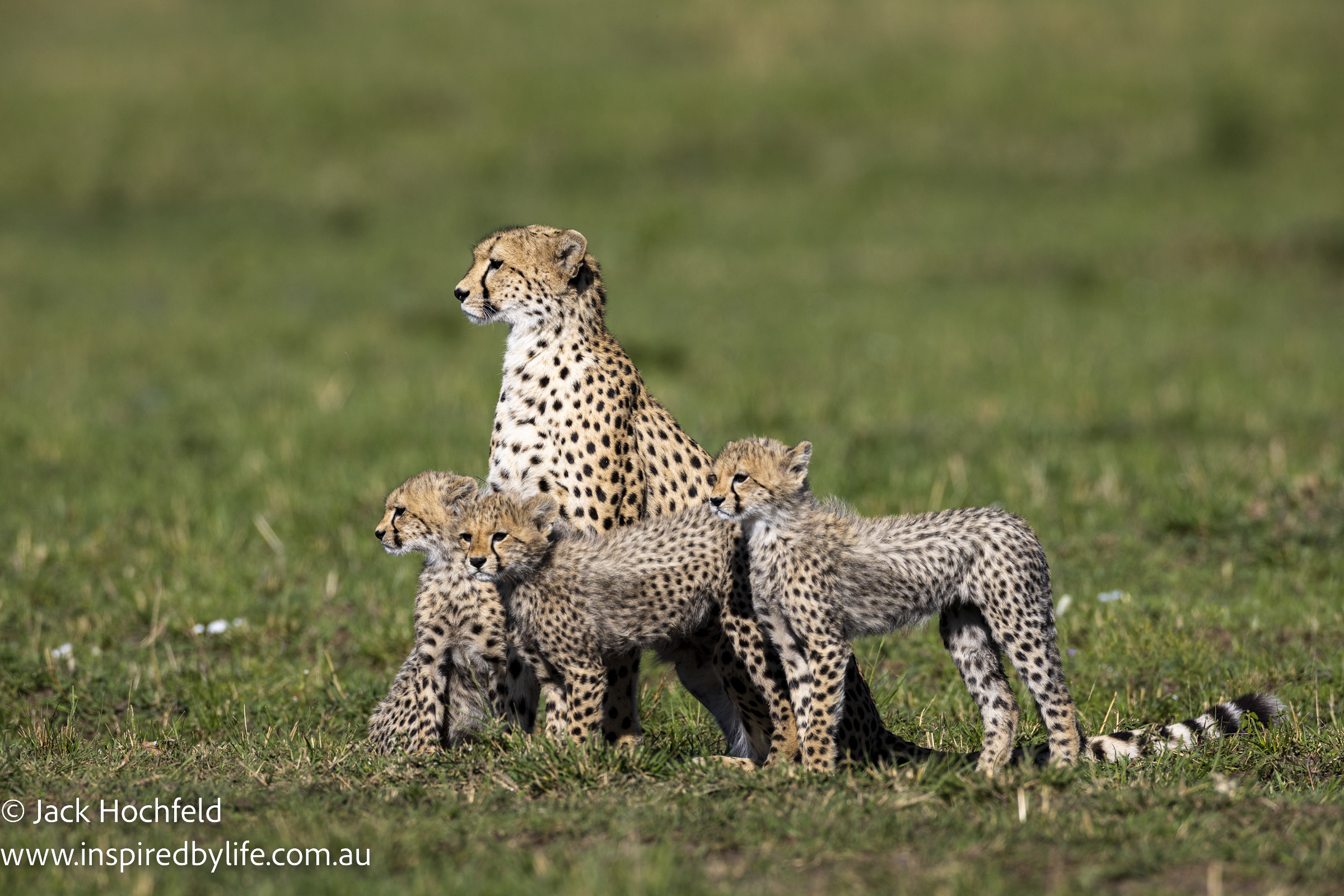 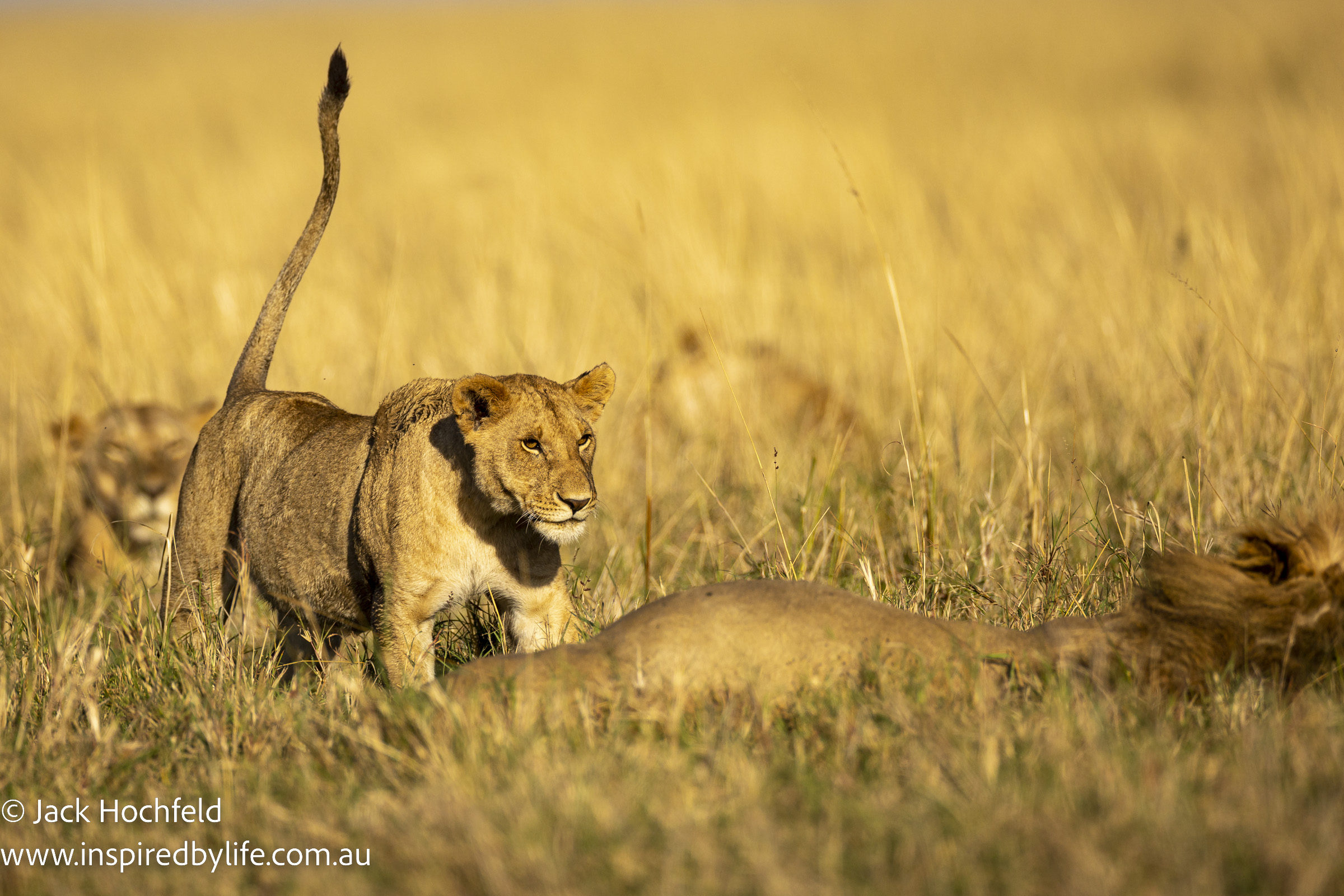 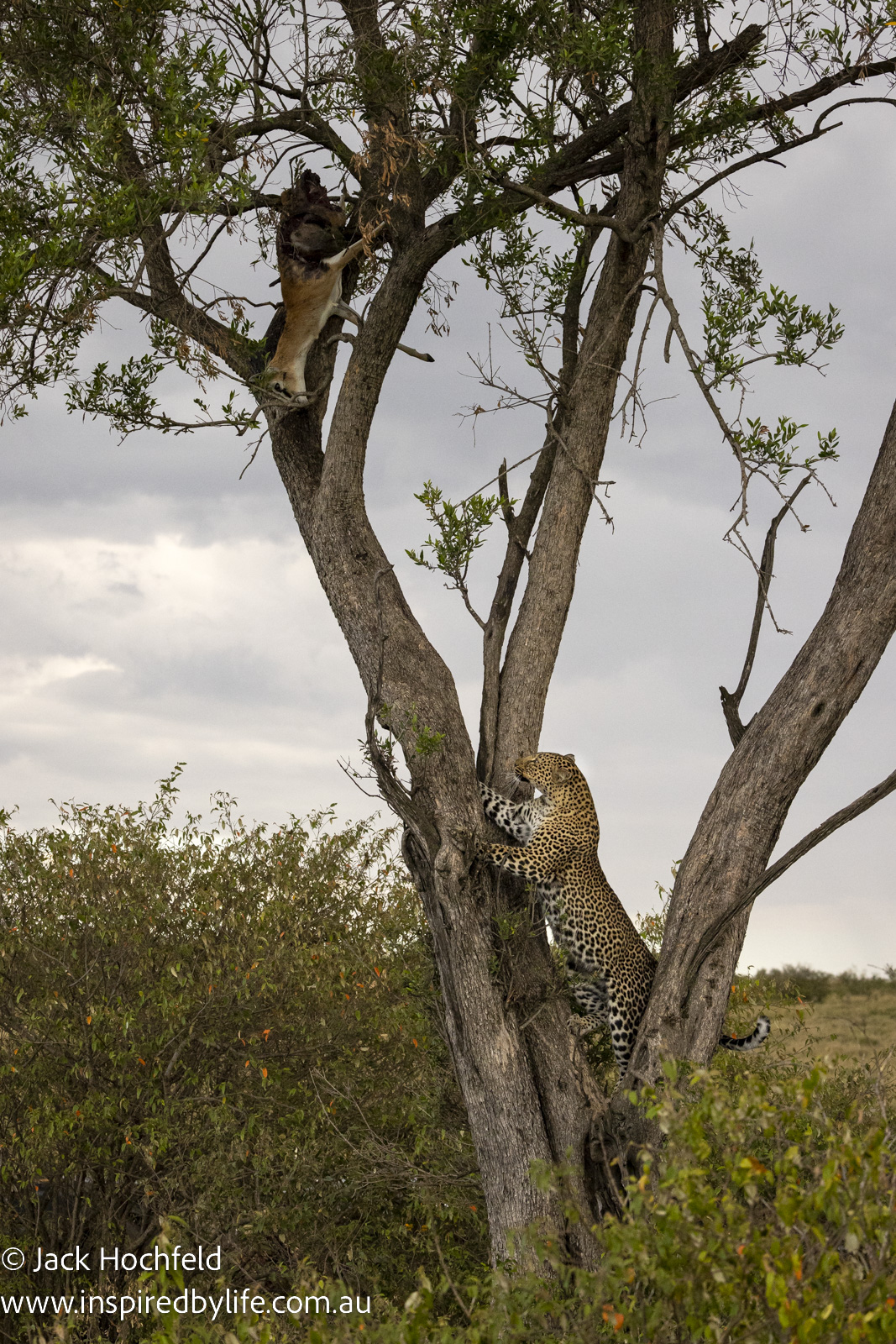 Vehicles crowd the game, with much undisciplined and poor viewing etiquette. Guides talk on their cell phones, visitors jabber away- not exactly peaceful but everyone manages to view the sighting. Rangers patrol frequently but have little overall effect, although the vehicles behave when the rangers are in the area. Game viewing etiquette and procedure is enforced but hardly makes difference- a major change is required.

The Kenyan staff are super, helpful, friendly, responsive and accomodating- nothing is too much trouble.

What a fantastic, memorable and photographic learning experience, superlative in almost every way.

The rest of my travelogue will speak visually!

*French general Bosquet’s comments about the charge of the light brigade during the Crimean War.

Photo Credits: Jack Hochfeld (Please have a look at his full portfolio here)

All images & text by Jack Hochfeld 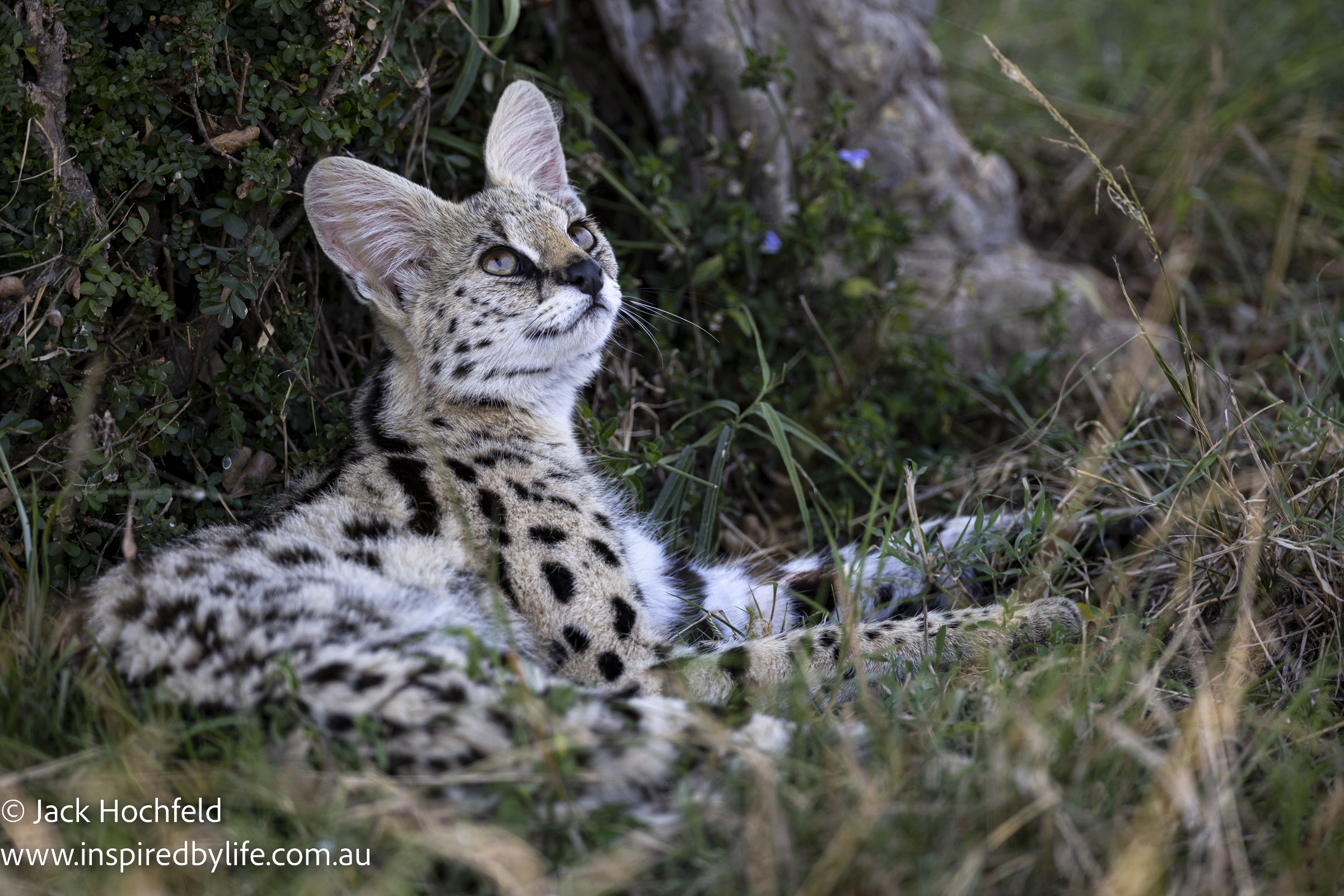 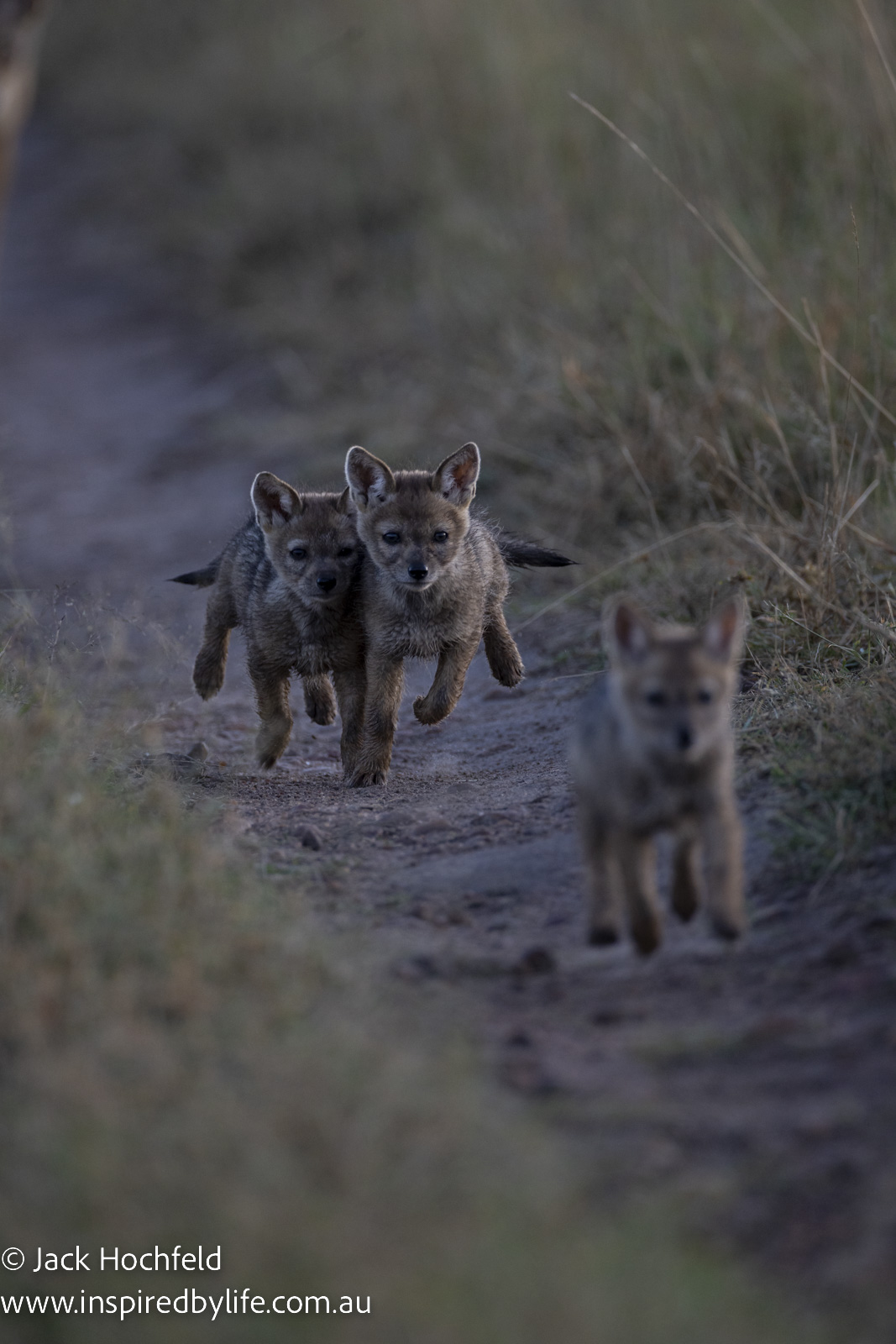 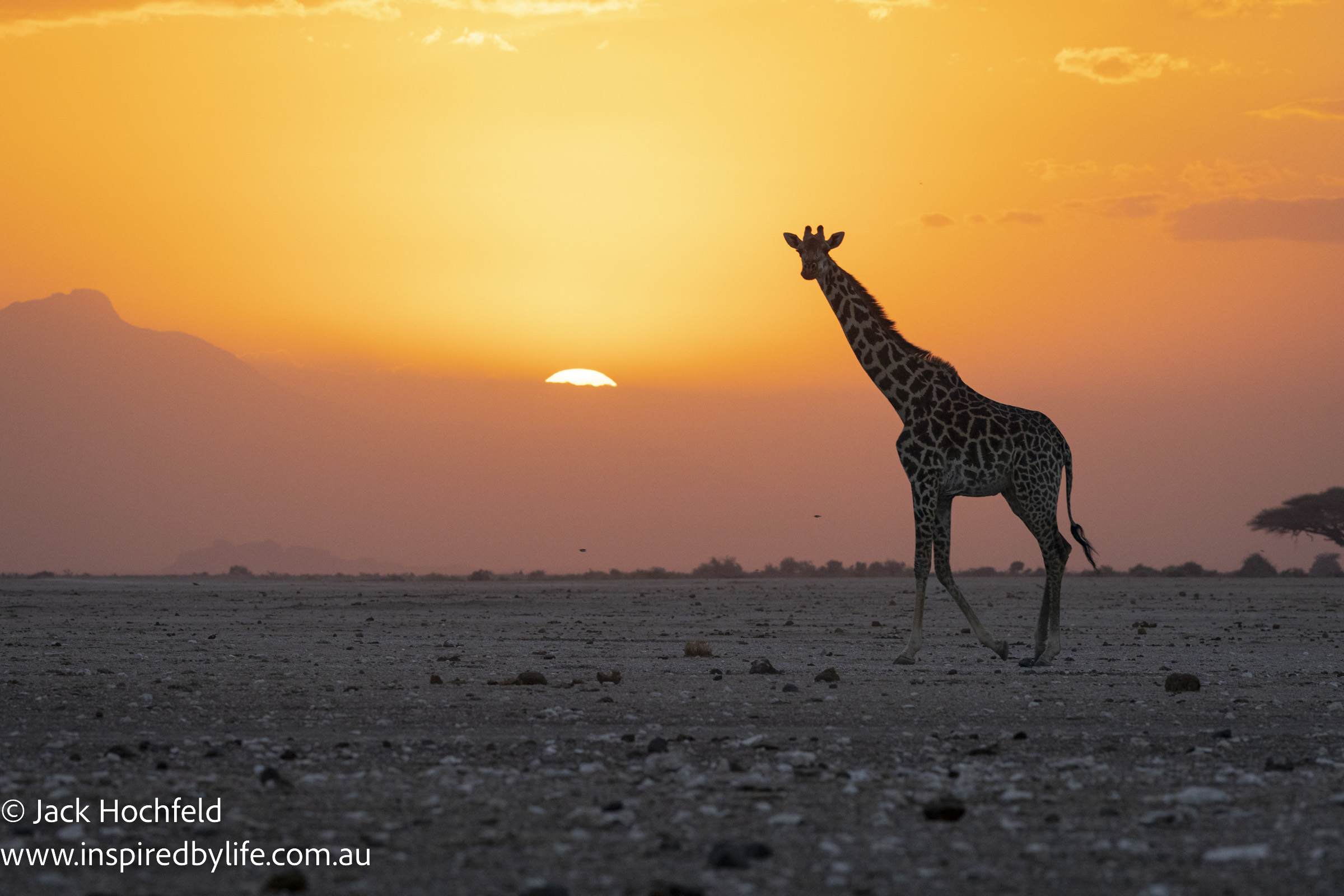